How do I register for academic coaching?

What are the different types of coaching sessions available?

What can I expect from a live coaching session?

What are the guidelines for recorded coaching sessions?

Where do I find SPSS?

Where do I find information for research designs? 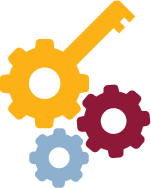