As with Cohen's d, we can compute the R-squared value using a formula. There are several different formulas that can be used. Here is just one example: 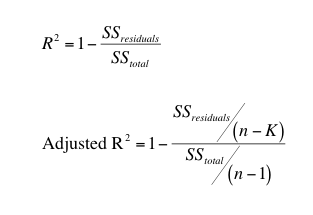 In order to complete this computation, you must also know how to compute each sum of squares (deviations from the mean), which can be a time-consuming process, especially with larger data sets. Thankfully, like with Cohen's d, we can also use technology to compute the R-Squared.

Each time you conduct a regression analysis in SPSS, a table will automatically be included that contains the R-Square and Adjusted R-Square values, as shown below:

When reporting the results for our analysis, we would include that the R2 = .305. This means that approximately 30.5% of the variability in the outcome variable is explained by the regression model.

Interpreting the Coefficient of Determination

You'll notice that when conducting a simple linear regression, with only 1 predictor and 1 outcome variable, the R-square value is the same as what you would get if you run a simple correlation analysis between those two variables. This is because the model is based on the relationship between only those two variables.

**For additional assistance with computing and interpreting the effect size for your analysis, attend the SPSS: Correlation/Linear Regression group session**