Levels of Measurement and Variable Types

Note: SPSS lumps both interval and ratio into a single classification: "Scale"

The graphic below should help you visualize the four different levels of measurement. See the definitions and examples below for each. 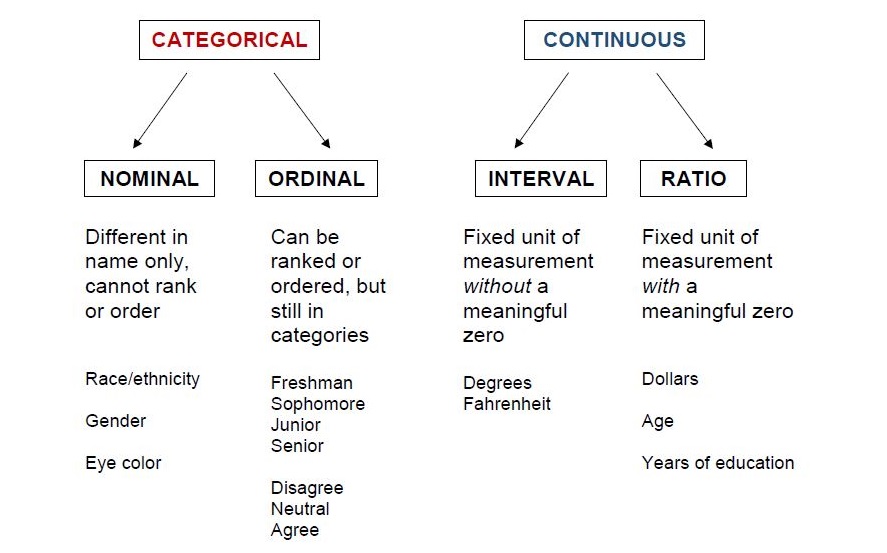 Nominal variables are categorical variables where the categories are different only because they are named differently. We cannot rank or order the categories. Some examples include the following: race/ethnicity, gender, eye color, or neighborhood.

Ordinal variables are categorical variables where the categories can be ordered or ranked. Some examples include the following: class level (freshman, sophomore, junior, senior) and education level (less than HS, HS diploma, some college, college degree).

Interval variables are continuous/scale variables with no meaningful/absolute zero. A meaningful/absolute zero means that there is an absence of something. In an interval variable, 0 is just another data point along the scale, it does NOT mean the absence of something. For example, 0 degrees Fahrenheit is not the absence of heat or temperature, it is just another number along the temperature spectrum (it does mean it’s pretty cold, though).

Ratio variables are continuous/scale variables with a meaningful/absolute zero. In a ratio variable, 0 means that there is nothing there. For example, if I have 0 dollars, I have no money. If I have 0 hairs on my head, I am bald.