The standard normal distribution is actually a probability distribution. By identifying points on the curve, we can determine the probability associated with lying at that point. How these probabilities were determined would take a lot of explanation. Suffice it to say that that work has already been done, so understanding how these values were derived is not the important part here. :)

When we first start talking about probability for the normal distribution, we're often introduced first to The Empirical Rule. This states the following: 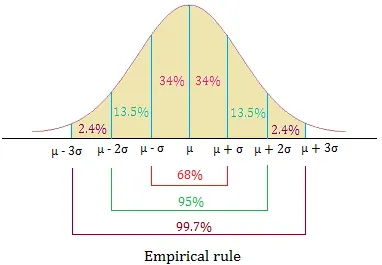 So, by determining how many standard deviations a value is from the mean, we can determine the probability of obtaining that value on that distribution.

We completed the computation for this on the previous tab, but we can also use critical thinking here:

What's the probability of picking a person that has an IQ of 95 or less?

Typically probability is reported as a decimal. To convert a percentage to a decimal, we can divide the percentage by 100: