When you're comparing two groups, like in an independent samples t-test, the most common method for assessing the size of the effect is by using Cohen's d. In this instance, we are simply standardizing the difference between the groups.

Starting from the "old school" method, we can compute Cohen's d using a basic formula:

If you're using SPSS version 27 or higher, you can use SPSS to include an effect size estimate with your output for your independent samples t-test. Simply check the box next to "Estimate effect sizes" in the Independent Samples T-Test dialogue window, as shown below. 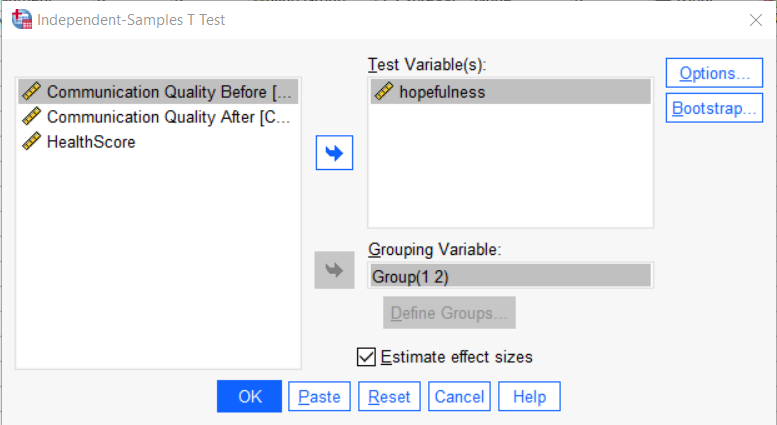 This will prompt SPSS to include the following table in the output:

Here we look in the top row, where it says "Cohen's d" and we look at the Point Estimate value. We would report this in the text as d = 1.084.

The general guidelines for interpreting the effect size are as follows:

You should refer to your course resources to verify this is the same guideline followed by your readings, as some sources use slightly different interpretation values.

**For additional assistance with computing and interpreting the effect size for your analysis, attend the SPSS: T-tests group session**