The Point-Biserial Correlation is a special case of the Pearson Correlation and is used when you want to measure the relationship between a continuous variable and a dichotomous variable, or one that has two values (i.e. male/female, yes/no, true/false).

As with the Pearson and Spearman results, SPSS will generate the results in a matrix. You can ignore any boxes that show a "1" as the correlation value as these are simply the variable correlated with itself. These values will form a diagonal across the matrix that can be used to help you focus on the correct values. You only need to explore the correlation values on half of the matrix. APA Style uses the bottom half. 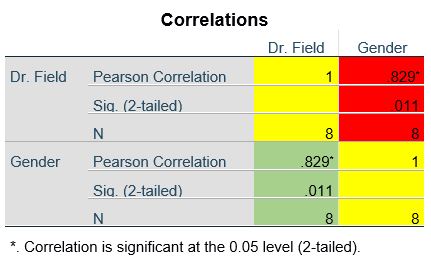 With the release of SPSS 27, users now have the option to only produce the lower half of the table, which is in line with APA Style and makes it easier to identify the correct correlation values. 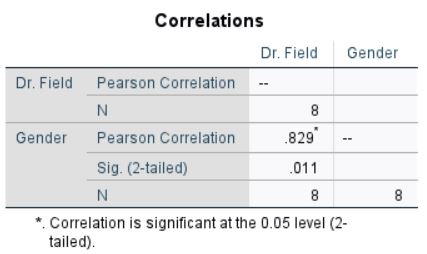 When reporting the results of the correlation analysis, APA Style has very specific requirements on what information should be included. Below is the key information required for reporting the Point Biserial Correlation results. You want to replace the red text with the appropriate values from your output.

A point-biserial correlation was run to determine the relationship between income and gender. There was a negative correlation between the variables, which was statistically significant (rpb(38), p - .023).